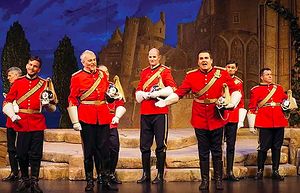 Looking for an old-fashioned theater experience? A good first stop is Lamplighters Music Theater’s current show, Patience. With a 21-piece orchestra, large cast and incredible costuming, the show is a delight to watch. Gilbert’s usual wit and wordplay are as sharp as ever in this satire about those who get caught up in what’s fashionable.

The show follows a dairymaid named Patience and the two men who love her – and the twenty other women who love them. It is set in the “Aesthetic Movement” of the Victorian Era. This movement harkened back to an idealized medieval era and encouraged its followers to eschew modern looks and ideals to focus on appearing natural and beautiful. Essentially, 19th Century hipsters.

“Ella: The love of maidens is, to [Bunthorne], as interesting as the taxes!
“Saphir: Would that it were! He pays his taxes.”
Act 1, Patience

Despite hating each other, Gilbert and Sullivan created 14 comic operas together. These were successful in their lifetimes and directly affected the development of modern-day musical theater. Their shows are highly satiric, making fun of society in ways that still feel current and poignant.

This production is wonderful. The performers sing the classical score to perfection on a well-designed set, wearing gorgeous costumes. The live pit orchestra makes the music surround you in the way a recording never could. Almost every character has a costume change and each one is a visual delight. Most of the lead actors are double cast so you may see one of two actors a role on any given performance.

When I attended there was an absolute standout among the cast. Taylor Rawley, playing the secondary character, Liet. The Duke of Dunstable, gave an exemplary performance. From his beautiful singing in group and solo pieces, to his acting even while out of the spotlight, he stood out among the cast as someone to watch for in productions going forward.

There are, of course, bits to critique in the show. In the opening number, “Twenty Lovesick Maidens,” for example, there are only sixteen women on stage. Still, to be fair, it would be difficult to fit any more people on the stage. Another issue was that there was a considerable amount of paint damage in the act one set from the show’s first weekend of performances.

There’s nothing groundbreaking about the production. If you take your seat hating Gilbert and Sullivan or operettas, this show certainly isn’t gong to change your mind. But the show is good and it’s done well. The costuming in particular is phenomenal.

In short, Patience is a darn good show that will send you out of the theater with a tune in your head and a smile on your lips.